BROWSERS IN EUROPE: SAFARI AHEAD OF FIREFOX, FOLLOWING CLOSELY BEHIND INTERNET EXPLORER

Published on 25/11/14 – Leader of the browser market, Google Chrome pursues its ascension, now counting more than one-third of visits in Europe. Among its challengers is Safari, who has played its cards well over the course of the last few months to capture 3rd place from Firefox, and is now well-positioned to take over 2nd place from Internet Explorer…

The following graph presents an estimation of the average distribution by browser of visits recorded on European websites over the last 13 months. The study was carried out across 23 European countries (see Methodology).

In Europe, one out of 3 visits via Google Chrome

Safari, the leading browser in the United Kingdom, soon behind Google Chrome

The following graphs show the evolution for 4 European countries: Germany, Spain, France and the United Kingdom. These are estimations of the average visit distribution for the top 5 browsers, in terms of share of visits for sites in each of these 4 countries in October 2014 and October 2013. Despite its growth in Europe, Safari will soon be overtaken by Google Chrome in the United Kingdom

Chrome, #1 in France and in Spain, gained ground in each country 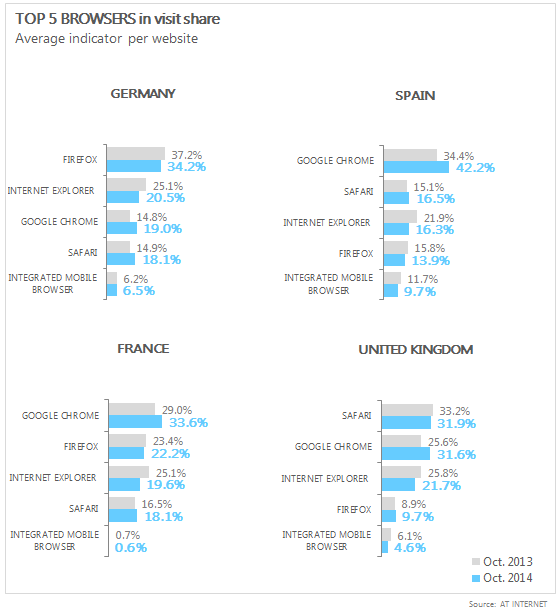 Google Chrome, the browser leader in Europe with one in three visits, is flying high with a 14-point growth on the #2 browser, Internet Explorer, in terms of visit share in October 2014… As the #1 browser in France and Spain, Google Chrome is now set to go after the #1 spot in the United Kingdom as well, which has historically been Safari’s territory. Last July, Safari took 3rd place from Firefox in the rankings, and is now closing in on Internet Explorer’s share of visits, which has lost 6 points in one year. The browser market’s evolution is largely linked with the evolution of means of Internet access over these last few years: the colossal Google, aside from its omnipresence, benefits from its significant penetration of the booming mobile market, which is also the case for Safari via the Apple brand.
Download