Published on 18/02/14 – “Not provided” continues to expand after Google adopted the HTTPS protocol for users logged on to their accounts at the end of 2011, for the different versions of Firefox, Safari and Chrome browsers in 2012/2013, and for all users in September 2013. These different actions have led to a continuous rise in the share of “not provided” search queries over the past two years.

In order to establish the cross-section of websites to be used as part of a study, a website is only used if the selection criteria, which have been established previously, are respected. These criteria are very strict and their aim is to remove any websites which have an anecdotal audience, or a chaotic audience, or whose collected data underlines a dysfunction in the measurement. For each country, only websites whose traffic has been mainly generated within the country itself are considered. In addition to this, only visits to these websites which have been generated within the country itself are considered.

Une hausse de plus de 50 points en un an A rise of more than 50 points in one year In January 2014, the share of “not provided” visits coming from Google was on average 81.2% for visits made in France: 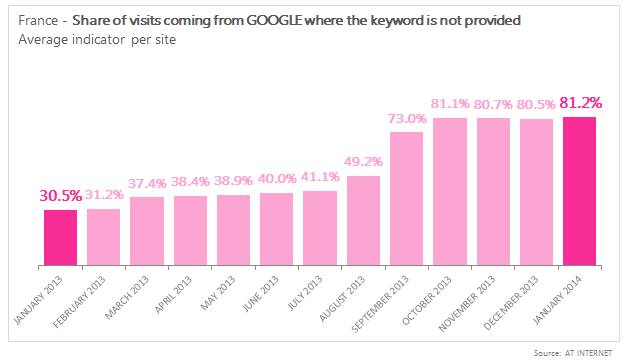 An increase of 35 points in one year

As is the case for France, the US also experienced a very significant rise in the share of web visits where the keyword is not provided in September vs. August 2013:  +14.4 points in a month. +35 points between January 2013 and January 2014. The share remained stable over the last 4 months. 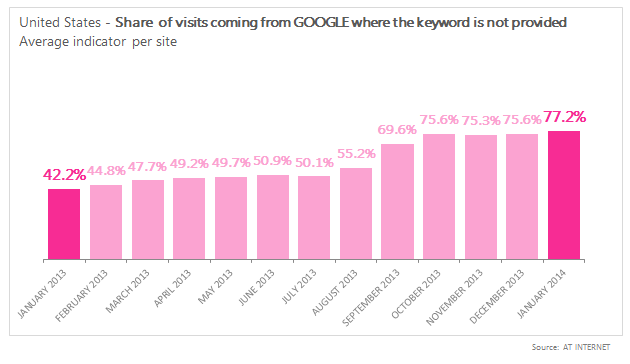 A rise of more than 40 points in one year 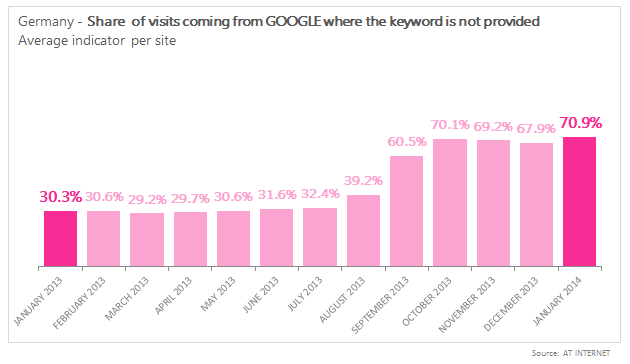 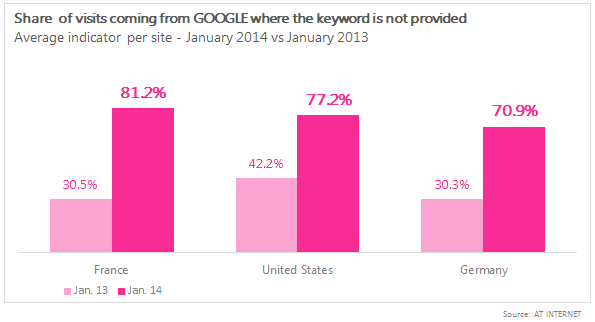 On average, 92.3% of “not provided” keyword search queries from Google Chrome, 91.5% from Firefox and 89.7% from Internet Explorer for a website in France. 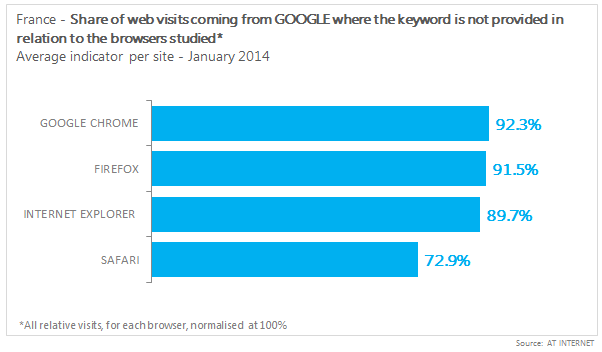 Since extending the SSL protocol to all Google users in September 2013, the number of “Not provided” Google requests has exploded. Using the pretext of respecting confidentiality and privacy, Google no longer reveals the keywords which have led visitors to a site except for sponsored links. These sponsored ads, such as Google Adwords, continue to provide information on the search requests made by Internet users. Advertisers must, of course, pay for these ads. Questions can also be asked about the collection and use of personal data through the different services provided by the American giant including Chrome, Google+, YouTube, Picasa, Maps, Drive, Gmail, etc. The CNIL (The French National Commission on Informatics and Liberty) recently condemned Google following its refusal to make its policy on data confidentiality on the Internet comply with French law. Other search engines are also in the process of encrypting some of their data. Bing is carrying out tests with the aim of encrypting its results’ pages, and Yahoo! has also started to encrypt its pages, leading to a major loss of information for companies. Web companies will soon have no more access to the keywords used by Internet users on search engines, the result of which will ultimately penalise the SEO world. Encryption applied by the different search engines (Google, now Bing and Yahoo!), and also web browsers (Firefox, Chrome, Safari etc.,) by implementing SSL (the security protocol which creates https for all Google requests made from browsers), means that the 100% “not provided” barrier will probably be reached very soon. Keep up to date with the latest information on our website.
Download