Published on the 11/12/14 – ISPs are trading legal barbs, allegedly blocking or slowing bandwidth for each others’ services, and buying each other out. With all this taking place in the background, the atmosphere of the Internet service provider market is not settling down – far from it. In terms of price, coverage and broadband speed, Internet service providers are waging a merciless war. At the end of 2014, Orange clearly dominates the market in France, especially as far as website traffic is concerned, followed by its two main challengers, SFR and Free.

The following graph shows an estimate of the average traffic distribution recorded by websites, including responsive design sites, and applications in France in October 2014 by the different Internet Service Providers. Traffic from mobile network operators, traffic coming from a mobile virtual network operator or MVNO, is included as part of the owner-operator network data.

Orange has a higher share on websites than on applications:

SFR and Free, 2nd and 3rd respectively, have a stronger presence on apps:

A twice higher share for Bouygues Telecom on apps than on websites:

Numericable rounds off the ISP top 5 with a higher visit share on websites: 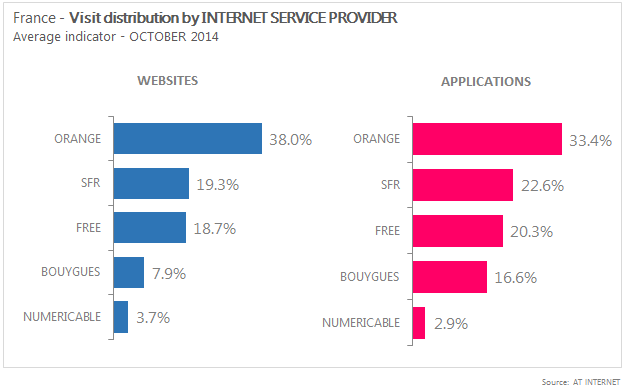 Websites: in the top 5, only Bouygues Telecom gains ground

The following graph shows an estimate of the average traffic distribution recorded by websites, including responsive design sites, in France from October 2013 to October 2014 by the different Internet Service Providers.

SFR and Free lost ground in one year on websites:

When Orange increases in apps traffic

The following graph shows an estimate of the average traffic distribution recorded by applications in France from October 2013 to October 2014 by the different Internet Service Providers.

Orange, the leading operator, increased by almost 1 point over the last 12 months with a peak during the summer. SFR lost 1.2 points in one year. Free and Bouygues remained stable in October 2014 vs. October 2013:

Numericable lost a little ground with -0.2 points over the last 12 months.

With 38% of traffic in October 2014, Orange is largely ahead in the Internet service provider market which has been quite stable over the last 12 months. It is largely ahead of its two closest challengers, SFR (19.3%) and Free (18.7%), followed by Bouygues (7.9%) and Numericable (3.7%). The only one to grow in website traffic is Bouygues Telecom, which gained 1.4 points in one year. Orange is also the leading operator in terms of apps traffic as well, and increased by almost 1 point in one year. We are wondering how Numericable will establish its place in the market with the purchase of SFR. The new Numericable-SFR becomes number 2 in the market, behind Orange and ahead of Free in terms of number of subscribers. Moreover, the go-ahead from French competition authorities regarding Numericable’s planned acquisition of Virgin Mobile France could reinforce its position in the market.