SAFARI TAKES A PAUSE IN EUROPE

Published on 23/04/14 – The leader in the browser market since last summer, Google Chrome hasn’t stopped gaining visit share ahead of Internet Explorer. After continuous growth for several years, Safari lost little ground over the 3 first months of the year.

We are interested in the average distribution of visits, by browser, which have been recorded from a certain cross-section of websites (except mobile sites). In order to establish the cross-section of websites to be used as part of a study, a website is only used if the selection criteria, which have been established previously, are respected. These criteria are very strict and their aim is to remove any websites which have an anecdotal audience, or a chaotic audience, or whose collected data highlights a dysfunction in the measurement. For each country, only websites whose traffic has been mainly generated within the country itself are considered. In addition to this, only visits to these websites which have been generated within the country itself are considered. We calculate average traffic distribution per website. For every website, the visit share for each browser corresponds to the total number of visits for the browser which has been analysed, compared to the overall number of visits for all browsers combined over a given period. The European indicator is representative of the countries audited. The average visit share in Europe corresponds to the average of the indicators for the 23 countries studied. To evaluate the average, all countries are regarded as being equal in the value of their parameters. The 23 countries included in the study were: Austria, Belgium, Bulgaria, the Czech Republic, Denmark, Finland, France, Germany, Greece, Hungary, Ireland, Italy, Luxemburg, the Netherlands, Norway, Poland, Portugal, Romania, Slovakia, Spain, Sweden, Switzerland and the United Kingdom.

Google Chrome widened its gap with Internet Explorer and Firefox remained in 3rd place ahead of Safari: Google Chrome reinforced its position with more than 3 out of 10 visits in Europe in March 2014 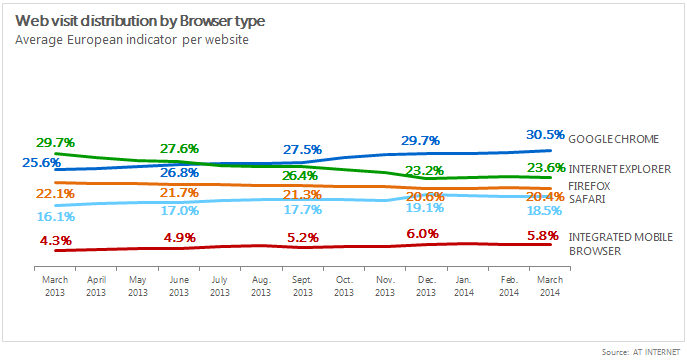 Safari decreases in the UK, where it is the leading browser

The following graphs provide additional information on 4 European countries: France, Germany, Spain and the United Kingdom. They show an estimation of the average distribution of the top 5 browsers in terms of visit share, for websites in each of the 4 countries, in March 2013 and March 2014.

Safari, the most-used browser in the United Kingdom with 3 out of 10 visits, lost ground for the first time 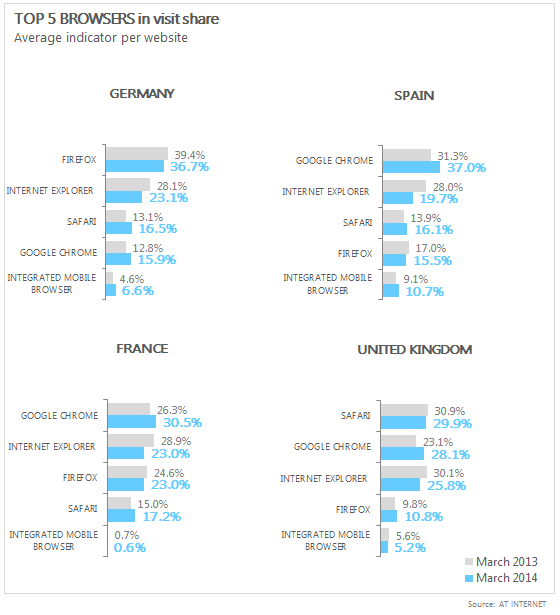 Nearly winning Firefox’s place in Europe few months ago, Safari experienced a slight decrease at the beginning of the 2014 year. Its visit share, which previously saw continuous growth, decreased by 0.6 points over the last 3 months. Safari lost one point in one year in the United Kingdom, where it is the leading browser, with almost 30% in visit share in March 2014. Will the enthusiasm for Apple reach a limit? Internet Explorer, losing ground in the long term, experienced a stabilization period in the first three months of the year, as did Firefox. Google Chrome, N°1 in Europe, continued to increase and accounts now for more than 3 out of 10 visits. N°1 in France and in Spain, and N°2 in the United Kingdom, it is not used in Germany, where the use of Google Chrome is not recommended by the German Federal Office for Information Security, leaving it in 4th position. As it’s the leading browser in Europe, and the search and online advertising leader by a long shot… we are moving toward a Web managed and controlled by Google at all levels. Google Chrome, N°1 en Europe, poursuit sa croissance et s’octroie maintenant plus de 3 visites sur 10. N°1 en France et en Espagne, N°2 au Royaume-Uni, il est en revanche boudé par l’Allemagne, où l’utilisation de Google Chrome est déconseillée par l’autorité allemande de sûreté des techniques d’information, avec une petite 4ème place. Leader des navigateurs en Europe, leader de la recherche et de la publicité en ligne avec des positions écrasantes… On se dirige droit vers un web dirigé et donc contrôlé à tous les niveaux par Google…