Published on 7/10/2014 – Microsoft’s operating systems dominate the market, generating nearly 2/3 of website traffic in August 2014. Nearly 1/4 of visits come from an Apple OS, notably thanks to iOS. Google ranks in 3rd position, with more than 1 in 10 visits coming from Android.

The following graph shows an estimate of the average traffic distribution recorded by European websites in August 2013 and August 2014 by the different groups of operating systems. The study was carried out in 23 European countries (see methodology for further information). Microsoft’s OS lose nearly 10 points in one year. Nonetheless, nearly 2/3 of web traffic uses Windows

For their part, Apple’s OS advance by more than 4 points

With now more than 1 in 10 visits coming from one of its OS, Google practically doubles its share with a 5.5-point gain for the same period 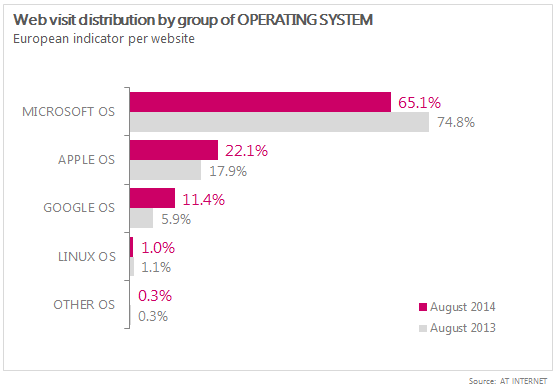 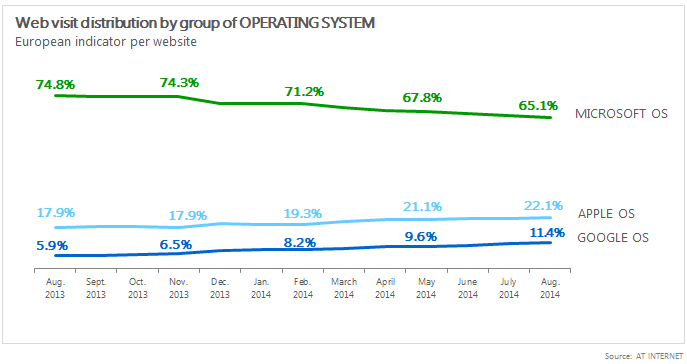 Apple and Google propelled by their mobile OS

The following table provides detailed information on the different operating systems by group from March 2014 to August 2014. Google propelled by Android’s momentum, with a 2.6-point gain in 6 months

Apple also progresses, though to a lesser extent, thanks to its iOS versions, with a 1.7-point gain in 6 months

Windows Phone has little presence among visits to websites 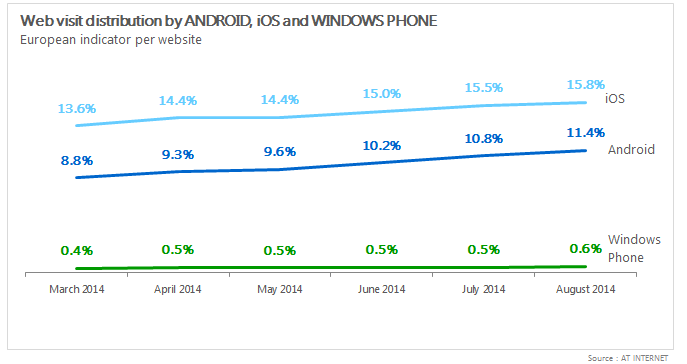 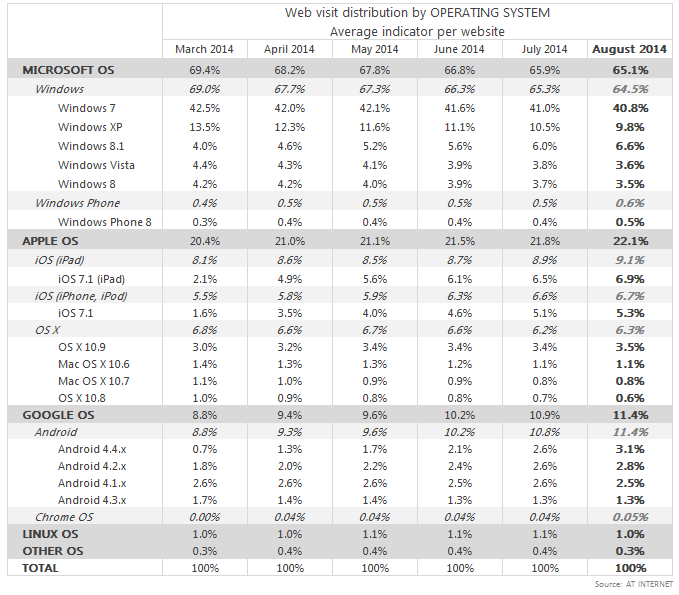 The following table provides detailed information on 4 European countries (Germany, Spain, France and the United Kingdom) for August 2013 and 2014 based on the top 4 operating systems established for the European average. Google OS’ share in Spain is nearly 2 times greater than its share in Europe, with 22.5% of visits in August 2014

Apple has a strong presence in the UK, with more than 35% of traffic (vs 22.1% in Europe) and a nearly 5-point gain in one year

In Germany as in France, visit share and the evolution of the main OS are close to those in Europe 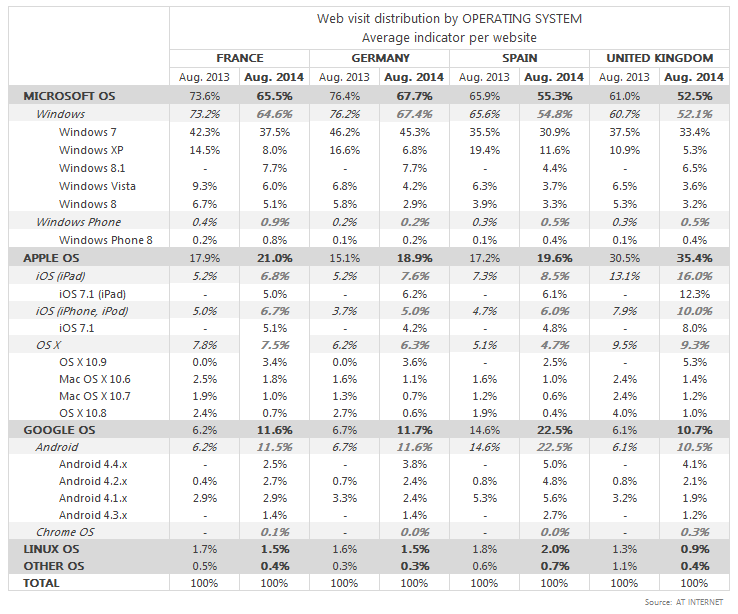 If the success of Apple’s and Google’s OS is due to their mobile versions, Microsoft lags behind in this promising area. Windows Phone saw a share of 0.6% in August 2014 vs 11.4% for Android and 15.8% for iOS in Europe. The UK is where Apple reached its greatest score, with iOS responsible for 26% of web traffic. In Spain, 22.5% of traffic came from Android in August 2014. Regarding desktop versions, the rise of Windows 8.1 is not enough to compensate the drop of Microsoft’s previous versions. Google is still far from establishing itself – its Chrome OS saw a visit share of 0.05% in August 2014. Finally, Mac versions also lost ground to a lesser extent. The next release of Windows 10 is planned for spring 2015. Will this shake things up? Stay tuned with AT Internet.