Published on the 29/04/2014 – The trend established in 2012 and 2013 has carried through to the beginning of this year: average traffic for websites in France continues to decrease although traffic for Mobile apps continues to grow.

At the beginning of 2014 website traffic continued to experience a downtrend The following graph shows the average evolution of web traffic recorded on websites in France in January, February and March 2014, compared to the same months in 2013. Website traffic declined during each of the 3 months of the beginning of the year, in March in particular: 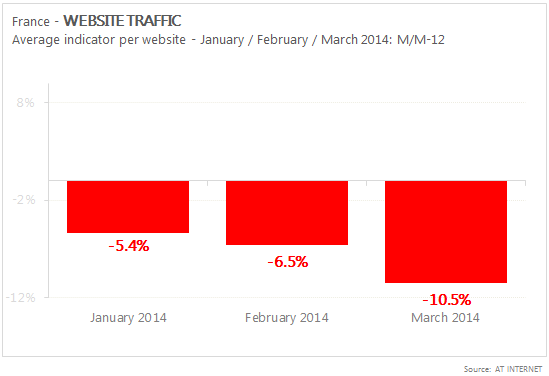 As for 2013, Mobile apps traffic increased 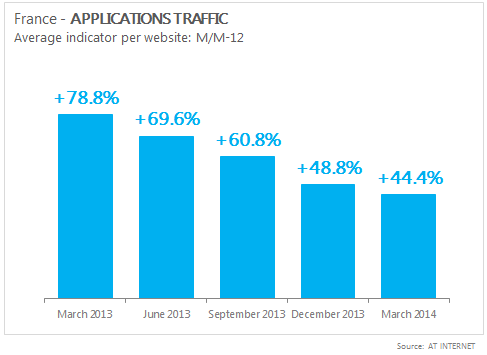 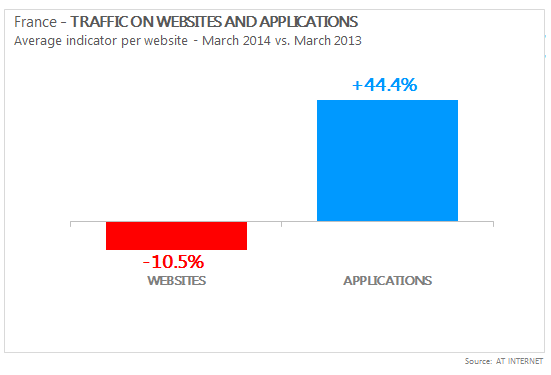 In France, more than 6 out of 10 Apps saw an increase on their traffic in March 2014

The following graph shows the cumulative proportion for applications according to traffic evolution recorded in France in March 2014 vs March 2013. Traffic for almost 1 out of every 5 apps more than doubled in a year 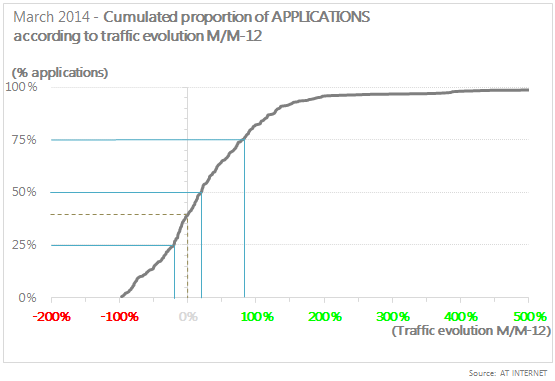 Whilst traffic for almost 7 out of 10 websites decreased

The following graph shows the cumulative proportion for websites according to traffic evolution recorded in France in March 2014 vs March 2013. In March 2014, half of websites experienced a traffic decrease of at least 12.4% 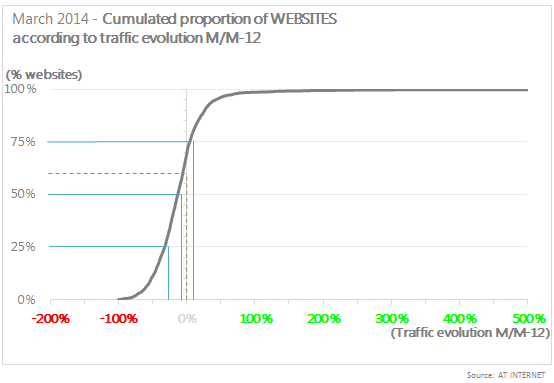 After a decrease of 3.7% in 2013, website traffic continued to decrease at the beginning of 2014 and dropped by more than 10% in March. At the same time, Mobile apps traffic is still experiencing an upward trend: in March 2014, traffic for half of applications increased by more than 19% and traffic for almost 1 out of every 5 apps increased by more than 100%. Mobile apps benefitted from the boom of smartphone and tablet sales in recent years. According to IDC, this sales growth should slow down in 2014 and in upcoming years. Annual smartphone volume in 2013 surpassed 1 billion units, accounting for 39.2% growth over 2012. 2014 growth is expected to be “only” 19.3% year-over-year. The same trend is anticipated for tablets: a growth rate of 51.6% in 2013 and a 2014 forecast of 19.4% to reach 260.9 million units worldwide.
Download