Published on the 13/03/14 – Social networks have become essential for companies’ online strategies. As referrers for news websites, they use them everyday to publish and increase the value of contents. In the space of a year, visits coming from Facebook have risen sharply.

For the purposes of this study we have taken into consideration 18 leading French news websites audited by AT Internet solutions.

For all visits, after the different traffic sources were considered for French news websites in January 2014: 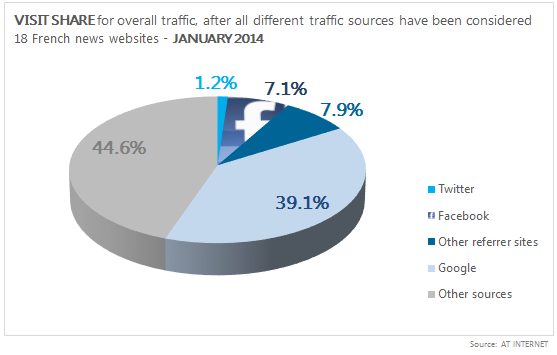 News websites: +4 points for the FACEBOOK referrer in the space of a year

The Facebook website’s visit share more than doubled in the space of a year, Twitter’s continues to remain stable 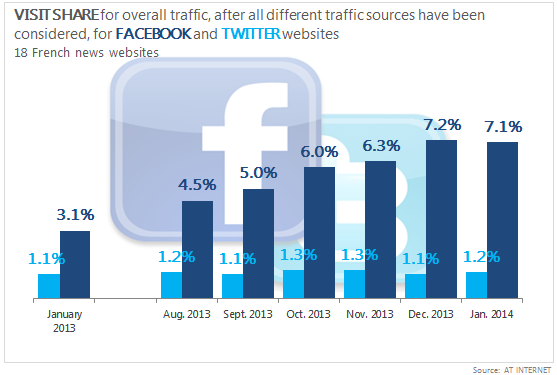 In terms of ranking in January 2014, out of the 18 news websites studied, on 14 occasions [www.facebook.com] was the most used level 2 domain in terms of visit share coming from referrer sites (vs 9 occasions in February 2013), 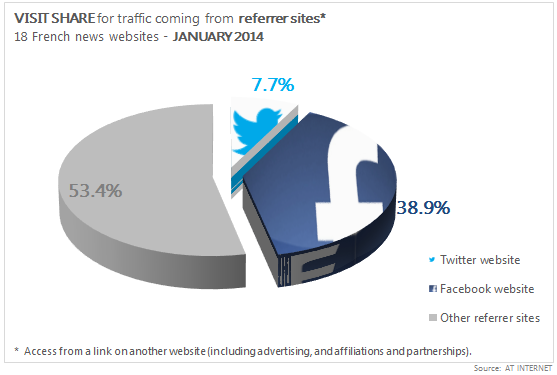 On average for French news websites, 7 out of 100 visits came from the Facebook website in January 2014, and accounted for almost 40% of referrer site traffic. The Twitter website accounted for 1.2% of total traffic and 7.7% of referrer site traffic. If the Twitter site, as a referrer for news websites, continues to remain stable with a visit share equivalent to that of last year, the Facebook site experienced a sharp rise. Its visit share more than doubled, rising from 3.1% in January 2013 to 7.1% in January 2014. The enthusiasm for Facebook is confirmed from year to year: 10 years after its launch (4th February 2004: TheFacebook.com), the social network is increasingly used by private spheres and professionals. It is following market evolutions and continues to increase with, for example, the recent purchase of the messaging app WhatsApp, winning new followers.
Download