Home > Resources > APPLE OS: ALMOST ONE OUT OF 3 VISITS IN THE UNITED KINGDOM

APPLE OS: ALMOST ONE OUT OF 3 VISITS IN THE UNITED KINGDOM

Published on 27/03/2014 – Windows loses ground, an increase for Apple’s and Google‘s Operating systems with traffic growth from mobiles in particular: the Operating system market continues to advance. Despite a loss of more than 7 points over the year in Europe, Microsoft remains largely ahead in the market with its Windows Operating systems. Apple, still rising in Europe, is establishing itself as a leading Operating System in the United Kingdom.

We are interested in the average distribution of visits, by operating system, which have been recorded by a certain cross-section of websites (except mobile websites). In order to establish the cross-section of websites to be used as part of a study, a website is only used if the selection criteria, which have been established previously, are respected. These criteria are very strict and their aim is to remove any websites which have an anecdotal audience, a chaotic audience, or whose collected data underlines a dysfunction in the measurement. For each country, only websites whose traffic has been mainly generated within the country itself are considered. In addition to this, only visits to these websites which have been generated within the country itself are considered. We calculate average traffic distribution per website. For each website, the visit share for each operating system corresponds to the total number of visits of the analysed operating system compared to the overall number of visits for all operating systems combined over a given period. The European indicator is representative of the countries audited. The average visit share in Europe corresponds to the average if the indicators for the 23 countries studied. To evaluate the average, all countries are regarded as being equal in the value of their parameters. The 23 countries included in the study are as follows: Austria, Belgium, Bulgaria, the Czech Republic, Denmark, Finland, France, Germany, Greece, Hungary, Ireland, Italy, Luxemburg, the Netherlands, Norway, Poland, Portugal, Romania, Slovakia, Spain, Sweden, Switzerland and the United Kingdom.

Microsoft OS still losing ground in Europe, ahead of Apple and Google OS

The following graph shows an estimate of the average traffic distribution recorded by European websites in February 2013 and February 2014 by the different groups of operating systems. The study was carried out in 23 European countries (see methodology for further information)

Windows lost 7.1 points over one year but is still leading the OS market

The group of Apple OS follows Windows by far, with a 3.1 point increase over the same period

Linux OS remained in 4th place with a 1% visit share in February 2014. 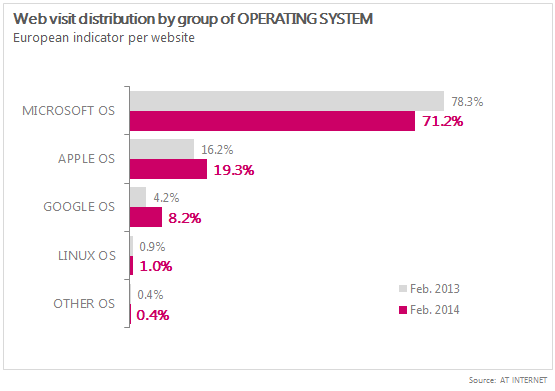 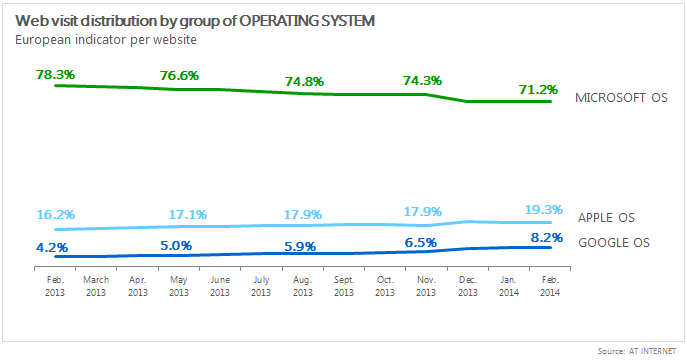 The following table provides detailed information on the different operating systems by group from September 2013 to February 2014.

After a loss of almost 3 points in December, the visit share of Microsoft’s Operating systems remained stable at the beginning of 2014

While the visit share of Apple OS gained 1.6 points between November and December 2013 to remain stable in 2014

The visit share of Google OS progressed by 1.2 points between November and December 2013 and by 2.4 points in 6 months 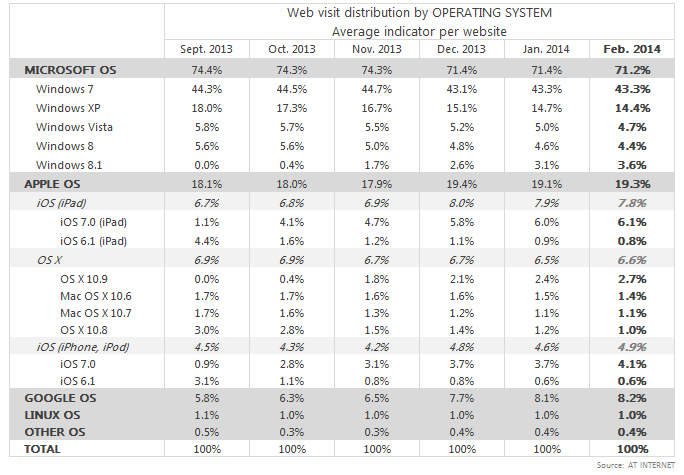 The following table provides detailed information on 4 European countries (Germany, France, Spain and the United Kingdom) based on the top 4 Operating Systems established for the European average. The table provides an estimate of the average distribution for the operating systems in terms of average visit share for sites of each of the aforementioned countries for February 2013 and 2014.

In France, the main operating systems’ evolutions and visit shares are similar to the trend taking place in Europe 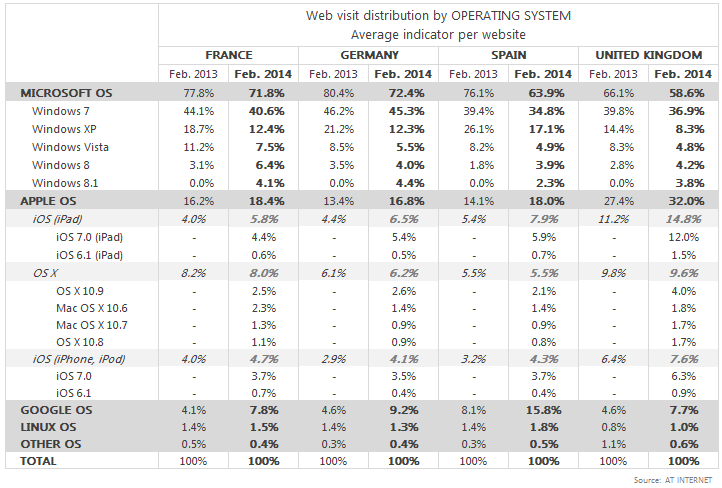 With an average of still more than 7 out of 10 visits in Europe in February 2014, Microsoft continues to dominate the market with its Windows Operating systems. However, it has been losing ground over the past few years, for example it counted for more than 9 out of 10 visits 4 years ago, back in February 2010. The rise of Windows 8.1 over the past 6 months has not compensated for the decrease in traffic caused by the previous versions of Windows. The Apple group continues to gain ground (19.3% of visits),  supported by the iOS for iPad. The share of visits coming from Macs has decreased slightly over the last 6 months. It is in the United Kingdom where Apple operating systems have advanced, with more than a third of visits coming from an Apple OS on average in February 2014. Google’s operating systems continue their ascent with on average 8.2% of visits in Europe with great success in Spain (15.8% of visits).